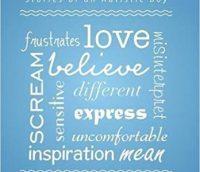 Breaking the Stereotype – A review of In My Words: Stories of an Autistic Boy

I was given a well-liked book, In My Words: Stories of an Autistic Boy, to review. Following 22-year-old Robbie Clark, the book chronicles the growth of an autistic individual from birth at a Baton Rouge hospital to his current life in Huntsville, Alabama.

It’s a short book – 109 pages – with vignettes prefaced by emoticons, a direct summation of Robbie’s book and his life, all dressed up in light blue, with the paradox of the constant emotions that run through Robbie’s days, in a kind of clutter. Featuring a foreword by his father and perspectives from both his parents and sister, Emma, sprinkled throughout the book, it is a pretty good primer on getting into analyzing how autism affects people.

How does autism affect Robbie? He can recite any factoid about the Academy Awards, off the top of his head, and like Owen Suskind, the star of the Academy Award-nominated Life Animated, has an almost encyclopedic knowledge of Disney movies. What I’ve gotten from the book, itself, is that Mr. Clark sees these things as parts of his personality, but not exact definitions of his character. Many of the stories point out that, from the beginning, he was more interested in being treated like anyone else, than just as another autistic individual. While he had moments of popularity and love, it wasn’t an easy ride to get from misunderstandings to a point of living freely in the world that he built.

Perhaps my favorite story in the book, “P.E. in School”, relates to the idea that sometimes people may have misconceptions about those with autism. It is a simple story, but one with a good build-up and even a twist to cement the importance of the event. In it, Robbie refuses to attend a gym class, because two boys constantly pick on one of his friends, and while that may be empathetic enough, the story further twists to show that those same boys liked Robbie and would usually pick him for their team.  Clearly, not everyone has a lack of empathy, and Robbie’s story is a great example of this misconception. I remember, years ago, when researching what it was like to have Asperger’s Syndrome that the symptom of “lack of empathy” was something I had seen plenty of times.

While the best option for him would’ve been to show up to class and stand up for his friend to demonstrate greater empathy. How many boys, in the same situation, would’ve demonstrated a commitment, especially given the way autism affects communication? How many would have refused because of loyalty to a friend?

I have two suggestions for the book. First, Robbie did have a few friends, the stories would benefit from having one of his friends describe what it was like to be around him. Second, although unusual for this type of book, I believe it would have been useful to add an index or table of contents, so people could find and reflect on specific vignettes more easily, especially as this is an important collection of short biographical anecdotes.

I did have a short Q&A with the author, who divulged a little about the present and the future. Currently he works with his father, Rob, at The Ledges, a golf facility in Huntsville, and he has recently gone on the road to do speaking engagements with his mother, Maggie. He has been to three speaking engagements so far: Huntsville, Baton Rouge, and Clearwater Beach, Florida, all of which really pleased him. He loved the large audience at the Baton Rouge event, 400 strong. While it was a brief segment, and his debut speech, the audience roared with approval once Robbie and Maggie finished their speech. He also told me that he loved how beautiful Clearwater Beach was.

As far as his job at The Ledges, it is very satisfactory work for Robbie, who has been employed there for almost a decade, longer than anyone else currently on staff.  He has nothing but compliments about his co-workers. He also likes how adaptable they are to his touring schedule.

For Robbie, the gist of his experience with autism is to be thankful for what you have, not for what you haven’t, and to concentrate on whatever drives you, completely to take advantage of your situation.

So there you have it, Robbie is a talented young man with autism. His book is about how he manages to overcome some myths about the disorder. For around $4 for a digital copy, and $15.30 for a hard copy, you can start your journey with Robbie and see where it takes you. It is good to be inspired.

You can purchase In My Words: Stories of an Autistic Boy by Robbie Clark on Amazon.com or Barnes and Noble. Best of all, Robbie has confirmed that he has a second book in the works.