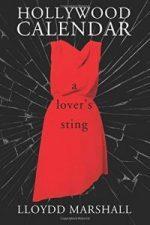 Murder Aspie Wrote – -A book review of The Hollywood Calendar: A Lover’s Sting

Author: Merrick Egber (August 17, 2017) For my next blog assignment, I was given the opportunity to review a novel written by an author with Asperger’s by the name of Lloydd Marshall. A relative of his was interested in promoting his work and so approached the foundation with the intention of having one of us read one of his books, and then to write about it, naturally the task fell onto me.  Mr. Marshall’s promise is in putting out a novel for every week, after sifting through 15 potential candidates I settled on the second novel titled The Hollywood Calendar: A Lover’s Sting.  This book is the first volume of a murder mystery series that intrigued me. So, it is with this article, that I look into the literary mind of Mr. Lloydd Marshall.

Karen Winkler (real name: Megan Hart) is a famous actress on the run from predatory forces that are either controlling her or targeting her because she knows too much and as what follows in these cases, time runs out for her. Sophia Russo is an aspirational actress and politician who was good friends with Karen and the last person that Karen talked to before her death. During Karen’s funeral, part of her management company seeks to make Sophia the heir apparent to Karen’s legacy. What may be the deeper motive to the company’s intentions?  Who were the forces behind Karen’s last days?

The book tries to be more than just your average murder mystery. Due to its subject, Hollywood, the book waxes about the meaning of fame, the blinding lights of celebrity, and the power of glitz and glamour over reality and hard news. It doesn’t completely make its point sharp enough, but what it does is it conveys a sense of relevance over the normalcy of our news cycle. For example, originally Sophia Russo feels very miffed that an interview with her and the rest of the cast for her first big film takes such precedence over the condition of the U.S. President but, she rationalizes this cycle in her head once the President recovers from his collapsed state as doing more harm if that news story took precedence over the interview.

The writing is also very, very good. You feel like you’re a part of Mr. Marshall’s world, that you care about these characters and you may want to even hang out with them if you knew them. The narrative is also well-versed, the jumping back and forth between Karen’s fall, and Sophia’s rise, are well designed enough to keep you on track, and with enough twists and continuity commitments to create a stable rollercoaster of a ride, like any good murder mystery.

Lloydd Marshall has a good amount of talent as a writer. Supposedly, he came up with the idea behind this series while having a crazy conversation with his brother on the way to Barnes & Noble. So a single conversation gets turned into such a good novel, and all in the process of a week, well done!