June may seem like any other month, outside of the Summer Solstice (which celebrates the coming of Summer), the first month without school, and Juneteenth (the celebration of the end of slavery). However, for those of us who are autistic, there is a special day that is celebrated on the 18th of June each year and that is Autistic Pride Day. Celebrated in 2005, by Aspies for Freedom (‘Aspie’ is a term of usage for someone with Asperger’s Syndrome, a form of autism), on the birthday of their youngest member, and modeled after the Gay Pride Movement, Autistic Pride Day is meant to be a celebration of the accomplishments and humanity of those with autism – as a response to those who saw autism as a disease or as a handicap to success. Coincidentally, Autistic Pride Day is one day before my birthday. So, it is neat to know that I almost share a birthday with this person of honor.

As many who have listened to the Els for Autism Fore! Autism podcast know, I do not doubt that there is validity in thinking that cases of severe – or profound – autism are very different than how many self-advocates see autism. I also have learned, that something so integral to my character is something I should feel proud about and not need to focus on some sort of solution to change who I am. It is not always easy to do, but it is something I remind myself of constantly, and something I encourage others to strive for. Needless to say, I celebrate each and every person who struggles with finding their pride for having autism spectrum disorder. I celebrate every accomplishment each person has made achieved, no matter how small. At Els for Autism, we celebrate this collectively and emphasize the importance of giving individuals with autism a voice through our Advisory Board.

I would like to profile the strides that each member of our Advisory Board have made in the autism community. We are so grateful for their participation in this group who we hold with very high regard.

Sue Abramowski has worked in a full field of human services for two decades now specializing in helping those with developmental disabilities and mental health diagnoses from her lived-in experiences. The term ‘peer counselor’ or ‘peer mentor’ isn’t often used, but her connection to the communities she serves and her experiences in her environments shows how important it is for someone with a relevant background to be engaged with populations of people who need serious help in their lives. She is also great at communicating when one needs a friend.

Andrew Blitman is an example of how one’s different neurology can inform and enhance the global portfolio of creative arts. He has credited his prolific output of artwork, poetry and other writings for prior blog articles and his books as helping him understand the world around him better as a self-advocate with autism. I would recommend his books that use poetry and illustrations to characterize the animals of our world from Andrew’s point of view.

Mike DiMauro shows how an unconventional life lived through the prism of autism can be very helpful. Through his Mike’s Mission Group, he has used his ability of transportation to help him carry out a goal to deliver UberEats orders in all 50 states and through this uncommon goal has used his freedom to blog about his travels while also serving the country, one meal at a time. He is also very passionate about his position as a self-advocate with autism as he is very vocal and very outspoken about the status it has with him.

Merrick Egber leads the Advisory Board as Administrative Assistant at Els for Autism. With pride for the autism community, he is a champion of the self-advocacy community and stands alongside them to amplify their voices. Merrick is interested in learning new things and always uses his time to help and support the community wherever he can.

Jim Hogan is an example of how the tech industry can accommodate workers with autism – especially by having him in a leadership role! He has served as a role model for so many who have followed him into a job at Google and as an anti-bullying advocate has made sure that working conditions there are comfortable and safe. He has even talked about Accessibility with the ‘father of the Internet’ Vint Cerf and how important it is to accommodate those with autism in the workplace.

Adam Jones is an example of taking that interest – in his case horses and running with it to create a productive, life-changing and transformative career path. Adam Jones works for Madison Fields – a division of the Madison House Autism Foundation – a Work Experience and Equestrian Resource for individuals with autism – in a full capacity as a graduate of the prestigious Meredith Manor International Equestrian College. He serves as an example of someone whose drive, determination, and hyperfocus serve as a great complement to his great character.

Dr. Kerry Magro is a beacon in showcasing the hopes and dreams of the autism community through his constant speaking engagements, his books and his consulting tasks with his latest one being for the U.S. version of Love on the Spectrum. He also has the KFM – Making a Difference Foundation where he has interviewed numerous individuals with autism to fit them with scholarships for college. But, sometimes the most important thing that a self-advocate can do, which is true of everyone on the list, is to not just be hard at work on autism education and awareness but also to be happy at work!

Paul Morris has been important in spreading awareness through the college campus scene, and especially into fundraising related to physical activities – like March Madness, or Marathon Running. Besides awareness he has also partnered up with organizations, like the Autism Science Foundation, to champion the cause of autism research. Lastly, what is important is that he also has worked in the Human Resources field at New York Medical College and the Office of Human Resources is a major cog in all of our goals related to finding people with autism jobs.

Isabelle ‘Izzie’ Piwnicki is a role model for other women with autism. With her mother, she has served in a leadership role for the Girl AGain initiative as part of the ‘Yes She Can’ Work Experience Program in upstate New York. Girl AGain teaches women with autism valuable work-related skills through American Girl Dolls and related accessories. Ms. Piwnicki also serves as a dancer par excellence. By using her life experiences, she has been able to serve as a model employee for Sephora – a famous set of personal care and beauty product stores.

Ron Sandison serves as a major inspiration in his community. His strong belief system in his faith which has allowed him the ability to teach countless congregations about autism has also allowed him to serve as a strong supporter of the mental health community where he is. He also serves as a strong proponent of journalistic outreach to many notable personalities on the autism spectrum.

Katie Santoro shows that organizational leadership matters. From her college days as a sorority figure to her days, now as Junior Board Chair of the Unicorn Children’s Foundation, invited guest to the FAU-CARD Mental Health Task Force, and also as Member-at-Large as part of the Els for Autism Advisory Board she loves championing people from the inside. She is especially supportive of championing women with autism and has been very important in the overall journey to make sure that women with autism are diagnosed properly and treated adequately.

It is important that a special education curriculum has at least one professor in the field be someone who has been through the system, themselves, and Dr. Stephen Shore is an example of it sending off future special education professionals with reputable knowledge from prestigious Adelphi University. Dr. Shore is also a writer and has had books published on navigating the college scene with autism and a guide on understanding the condition. Beyond that as a speaker and presenter, he, like everyone else on here, gives a voice to those who may find it harder to speak.

Connor B. Sturgis is our newest Board Member and serves as a pillar of our local community. In his capacity as a greeter at his church and as a full-time customer service employee at Publix (A regional grocery store chain) he shows how supportive people with autism are to the society around them. His zeal is in having his ear to the grindstone to find ways to support his local autism community through fundraising efforts, championing initiatives by Publix or even by being a good classmate to his fellow TLA students before he graduated from there.

James A. Williams is our international member. Born in England, at a very early age he noticed that he had many differences in his socio-communicative understanding of the world around him but he also considers his neurological difference to affect his processing of sound and sight. In 2010, he watched a Youtube video on playing piano and decided to become a self-taught virtuoso. Now he has memorized so many pieces by heart and has traveled constantly performing his music to further the cause of awareness and charity. What is striking is that when he was much younger he wasn’t as interested in learning the piano – but sometimes your passion can take hold of you at a much later age than you may have expected. 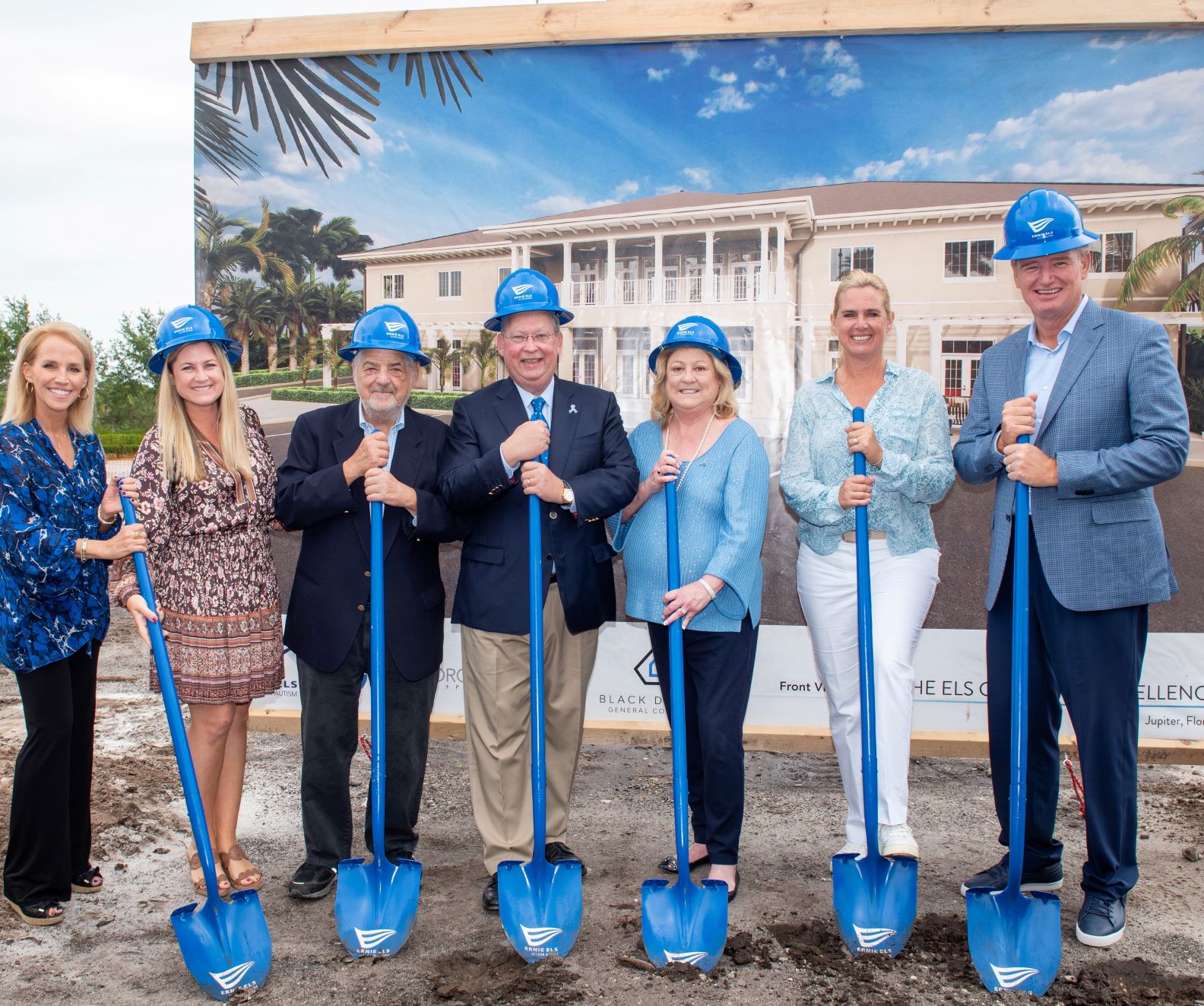 A Momentous Occasion: Celebrating the Groundbreaking of The Adult Services building