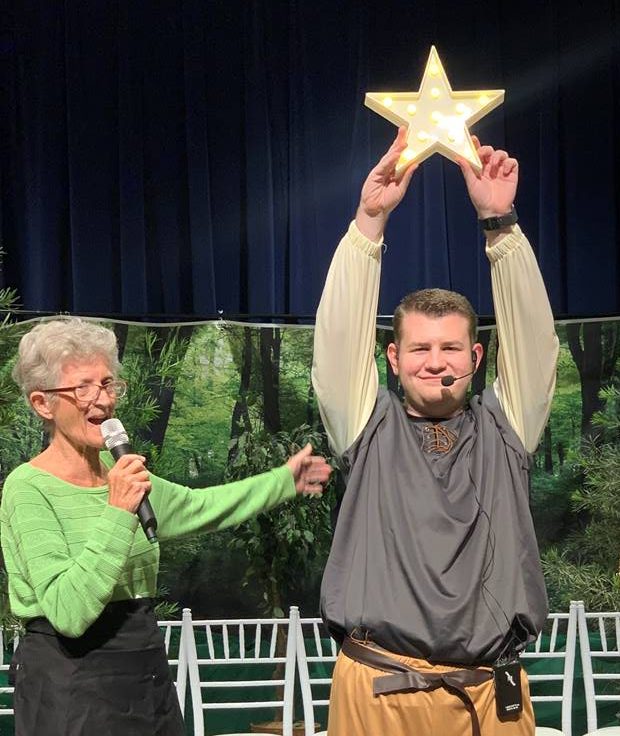 Theater Program Provides Game-changing Benefits for Individuals on the Spectrum

When I was younger, I used to be a proactive participant in the realm of theater. Usually, my roles were father figures (“Our Town” and “Anything Goes”) but wherever the staff wanted me to be, I could do it, and I did it well. Theater gave me the feeling of being a part of something, even if I had autism, I felt like an equal to all of the actors and actresses on stage. I felt like I was in another world.

There is a known benefit of theater programs for those with autism. According to an article from Northcutt, in Australia.  “Drama seems to appeal to some people on the spectrum as this is a controlled environment – the script stays the same, the cues rarely change, they can be prepared, they know exactly what a fellow actor is going to say and they know exactly how to respond.”

However, individuals with autism may feel intimidated in the few venues that are available for actors and actresses. It may be tougher for people who feel like their socio-communicative understanding is different from everybody else that they are working with. Sometimes there is a hierarchy that may make individuals with autism feel left out, isolated, especially if they are perceived to not be “team players.” Which is altogether wrong.

Which brings me to the successful theater program, a collaboration between the Els for Autism Foundation and Right on Q Theater Group–a group of actors and actresses with special needs, led by Ali Evans. Everyone works together to create, learn and rehearse for a series of big musicals, which they perform every quarter. Such examples include “Footloose in Big Easy Town,” and “Believe,” and ever since the Covid-19 crisis has taken center stage (no pun intended), we’ve been working on “Movies” (scenes of actors and actresses on our Els Center of Excellence campus playing their parts) and had a virtual premiere of “The Adventures of Peter Pan.” Unlike other programs, the theater program is truly “intergenerational” meaning that the older and younger enthusiasts work together in getting these productions to exist, of course with the addition of Ali’s excellent writing and directing.

Ali’s mixture of fun, imagination, and caring creates a magical and supportive environment that allows the participants to find their inner star and shine. I have observed the young adults in the program taking on the role of mentor for the younger participants.  Individuals who seem shy or do not feel confident have discovered their inner strength and courage.  For some participants, the theater program is a way to express their negative thoughts in a constructive and creative way.  They are able to tell their story and feel what it is like to be a star.

During the second season of the theater group on the night of the performance, our Recreation Coordinator, Kelley Coutts, noticed one of the mothers in the audience tearing up during her son’s solo. Kelley went over to see if everything was okay.  This mother said that her son had only ever allowed her to hear him sing.  He would not allow her to watch him when he sang.  This was the first time that she had ever been able to watch her son perform.  This fall this young man played the keyboard and sang the song “Let It Be” by the Beatles while her mother videotaped his performance.

Q: What were your prior experiences like in theater?

I started out as a singer/songwriter.  I performed in and around the Philadelphia area as well as Atlantic City and along the New Jersey shore. Providing lead and group vocals for national and local jingles at all the major Philadelphia studios, including Sigma Sound and Gamble and Huff Music, I was able to get jobs singing with various artists like Patti Labelle, George Thorogood, Bunny Sigler, Frankie Avalon, Crystal Gayle, Eugene “Lambchops” Curry, The Soul Survivors, and The Eddie Bruce Orchestra just to name few.  I was able to put myself through college where I earned a BA in English Literature and a minor in music.

Music is theater.  Every time you step onto the stage, you become a vessel for stories and emotions to be felt and shared.  Each song tells a story inviting the audience to go on a journey with you into that story and feel all the highs, lows, excitement, sadness, extreme happiness, etc.  Also, it didn’t hurt that my father was a drama professor at Wilmington College.

Q: What was the inspiration behind pursuing a career in theater?

I did not start teaching musical theater until I realized, with my own two children who have ASD, just how much can be gained from this art form by our exceptional community.  I was asked to create a Performance Arts program with a non-profit organization and that’s how I got hooked.  When my family moved to Florida, I decided, with the help of a wonderful friend, to create my own classes in Palm Beach County where they, at that time, had none.

Q: Can you explain the Right on Q Theater Group?

The name Right on Q Theater Group was created with all the actors in mind.  We use the letter Q instead the word cue as a special nod to the creative uniqueness of all of our actors.  They are all always Right on Q.

Q: How did you get to know about Els for Autism?

I learned about Els for Autism when trying to find the right environment for my own children with ASD.  My daughter desperately needed a safe academic and supportive atmosphere in order to thrive.  The exciting services and resources we discovered through Els for Autism has been completely life changing for my daughter.

Q: What has been the planning, and scripting, process behind each musical and movie you all have created?

With regard to the planning of each of Right on Q Theater Group’s productions, and with all of our classes, the very most important objective is to establish trust between the actors and instructor (me).  Everyone needs to feel safe to be who they are without judgement, constant evaluation, and therapeutics.  We sneak a lot of therapy into our classes, but our actors have no idea because they are having way too much fun to notice.

I learn and get to know each actor as an individual in order to discover their biggest strengths and then push them to push themselves to explore those strengths even further.  That gives them confidence to believe in themselves and work harder.  As a group, the actors learn to trust one another and work as a team.  Our scripts are based on familiar or sometimes not so familiar themes.  I usually come in with a basic outline of a show, and allow the actors/students to help fill in the dialog, stage directions, action, songs and music, etc. Every actor is involved in the making of our productions from beginning to end.

Q: What are the benefits of the theater program? How has it inspired your students?

The benefits of the theater program are limitless.  Actors/students learn to feel comfortable feeling uncomfortable.  Letting go is a huge part of acting, so just allowing the actors to act silly or play out goofy acting warm-ups is huge!  The actors learn to grow as a team and become a real cohesive group of friends that root for one another.  They learn self-expression without judgement, conflict resolution, patience, communication and flexibility through improvisation.   The confidence grows and grows and the actor who started out not wanting to sing, sings the loudest, and the actor who stutters, stutters less when reciting his/her lines.  Eye contact is made through pretending to be someone else at first, and then it becomes somewhat natural.  I could keep going on and on about the benefits of the theater program.

Q: What has been the most rewarding part of the program?

The biggest reward, for me, is to watch each actor truly grasp what it means to feel proud.  It is genuinely an indescribable spark of a moment to be a part of.

Q: Can you tell us a little bit about Zach Gottsagen, the former student of yours who had a starring role in last year’s Peanut Butter Falcon?

Zachary Gottsagen was a student of mine for several years.  We started at the Boynton Beach JCC and then moved to the Gold Coast Down Syndrome Organization in Boynton Beach.  Zach is a very dedicated actor and took drama class very seriously, but still knew how to have a great time in class.  Although he was confident, I watched Zach become more comfortable with himself and mature as an individual and with his peers.   He developed life-long friendships with his classmates.  He learned how to be a team player during our classes and, in fact, became our team leader.  What stood out the most about Zach was his fearlessness.  He wasn’t afraid of looking silly or sounding goofy or weird if it made the scene work better.  In addition, he is one of the nicest, most humble and big-hearted young men I have ever had the privilege of working with.

Q: How did it feel to see him on the stage at the last Academy Awards?

Q: If anyone wants to join your theater program, what should they do?

If anyone is interested in joining Right on Q Theater Group’s program please contact me for more information about all our available classes, Ali Evans at 609-230-6956 / aevans1235@gmail.com or contact Kelly Coutts at the Els for Autism Foundation at Kelly.Coutts@elsforautism.org.

Donate to the Theater Program

Els for Autism envisions a positive future for every person in our programs. Your donation helps lower the costs of life-changing programs such as the Theater program. Make a donation to the theater program using our wish list.