My Review of the HBO Movie “Temple Grandin”

Dr. Temple Grandin is one of the most notable of names among autistic self-advocates and one of the earliest examples of somebody explaining their own autism to others in such an eloquent manner. She has written books on the subject, teaches at Colorado University and has done the lecture circuit, from TED Talks, to a Google Conference. Next year, in March she will be speaking at the “Building a Neurodiverse Workforce” employment conference hosted by The Els for Autism Foundation.

Temple is such a treasure that in 2010, HBO released a docudrama titled “Temple Grandin” starring Claire Danes (“My So-Called Life”, “Homeland”) as the eponymous character. Directed by Mick Jackson, who worked on “Volcano” and “The Bodyguard”, “Temple Grandin” tells the story of a wide-eyed but very particular young woman whose short Summer stay at the ranch run by her Aunt Anne (Catherine O’Hara, “Home Alone”, “Schitt’s Creek”) becomes the keystone for the rest of her life. She invents her own “Hug Box”, inspired by the boxes used to hug cattle before they trek into the water, and even with her differences, she is an abstract visual learner, finds transitioning very difficult, and excessive stimuli exhausting, and finding her social skills to be different from others, she ends up revolutionizing the cattle business, by humane architectural methods in which over half of all slaughterhouses, the film goes to say, have been designed by her. 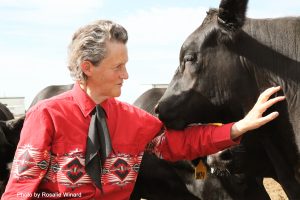 In a way, it compares to movies like “A Beautiful Mind” and more contemporary portrayals of autistic individuals, that I’ve noticed in media. Because Temple Grandin has such an interesting and unique mind, the film pushes you to acknowledge how she feels about each second, how fascinating the world must feel like to her, but also how scary and cruel it could be too. Claire Danes excels as her, rapidfire speech when interested in a subject, sensitive to a number of things, trying to understand the society around her, but outraged when society doesn’t understand her, what first could be a story about autism empowerment, also becomes a story on female empowerment in a male-dominated field. Some of the people whom she meets when she wants to write about cattle and wants to tour a slaughterhouse are very much focused on being a man’s club. As the movie goes on, you learn why she became the advocate she became, almost like she had to, not only were people not taking her seriously as a woman, but as a woman with autism at that, and she had to do what she could to earn her voice in this world.

I would highly recommend the movie, it’s accurate to the real life story, which isn’t always true when it comes to the film and TV business, treats the main character with dignity, sympathy and awareness. Anyone who is autistic, or knows someone who is, must watch the movie, that is really what I think.

If you are interested in finding the movie, digitally: